Nothing Monday or Tuesday, for no other reason than the fact that I was too busy with other things.

Wednesday turned out to be quite blustery with showers forecast for the morning. Luckily, I escaped the showers but unfortunately, I wasn’t able to escape the wind. Having said that, knowing that the outward part of the Beachy Head loop was going to be hard going, I concentrated on my pedalling and ended up doing quite a good ride, averaging 18.2mph. 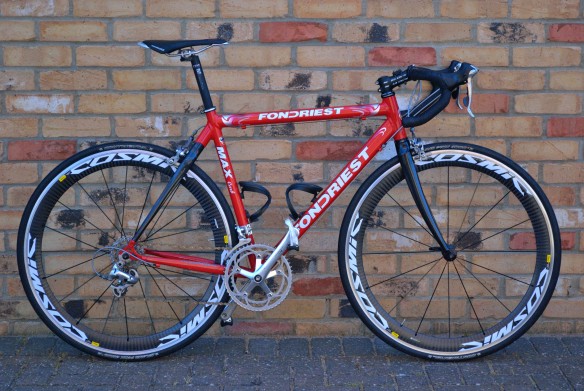 Wednesday afternoon, I went to the Tri-Store in Eastbourne and spent some money. I treated myself to a pair of Mavic Cosmic Carbone SL wheels. The wheels I had on my Fondriest were a pair of hand built 36 spokes on Ultegra hubs and CXP21 rims. By going to the new Cosmics, I have shaved a noticeable amount of weight from my bike. Thursday’s weather turned out to be similar to Wednesday’s and therefore, this was a good way to test the new wheels. So, first thing Thursday, with the Cosmics fitted with the same Continental GP4000s tyres as on my old wheels, I went out for the same ride as Wednesday, keeping to the same percentage of HR.

After 1 hour, I was averaging 19mph compared to yesterday’s 18.5mph. The noise these wheels make is a lovely smooth whooshing sound until you get out of the saddle and the sound then becomes more aggressive with every downward thrust of each pedal. Unfortunately, I got caught in a couple of showers. What difference in performance that made compared to yesterday, I don’t know.

Once the ride was complete, I uploaded the Garmin data to the Garmin Training Centre and compared the rides. Although both rides were done at an average HR of 154/155 bpm the end result was that with the new wheels, I was .3 mph faster than with the old wheels. I was actually expecting more but, in hindsight, the wind with the new wheels was slightly less than with the old wheels and in a slightly different direction. Also, these were two rides at quite good intensity, on consecutive days and so, for the latter ride, I would have been more tired than the previous day. the new wheels did feel more comfortable though, soaking up uneven road surfaces far better than the old wheels.

In order to confirm my suspicions, on Friday, I went out on a flat 20 mile routes. This is a route I do fairly regularly and due to the short distance, I tend to put the power on when I ride it. My fastest time this season was 19mph, a few weeks ago. Today, with quite strong Westerly winds, I did it in 20.1mph. This just goes to show that the Mavic Cosmic Carbone SLs do have a huge aerodynamics advantage over regular wheels.

And that’s it for this week.