With so many tyre manufacturers out there, promising this and that from their products, it’s been quite a challenge to come up with a definitive tyre to use on my TDF or Bust trip.

I currently use Michelin Pro Race tyres on my Fondriest. I’ve found these to be brilliant for comfort and grip but they tend to deteriorate very quickly. On the Trek, which is the bike I intend to use on my TDF or Bust trip, I’ve currently got the original wheels and original Bontrager tyres. A few days ago, whilst examining the wheels/tyres, I found that the wheel hubs needed a bit of maintenance and that the tyres could do with changing but, what to go for? 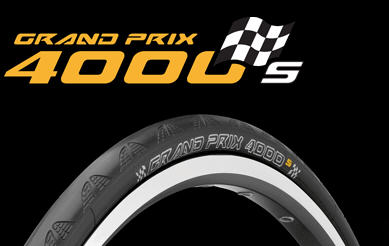 Enquiries have steered me towards the Continental GP4000s tyres. In the early 90’s I tried a pair of Continental Grand-Prix which I didn’t really like, due to the incredible high recommended pressures which made for a very harsh ride. I’m hoping that in the 18 years since I last used Continental tyres, that this characteristic will have improved. They still need to be inflated to a higher pressure than other makes but if the recommendations I have received are anything to go by, I may as well give them a try.

Another reason to give these a try is the recent documentary by Rob Penn, “Ride of my life: the story of the bicycle” in which he builds a bicycle using iconic components from all over the world. When it came to tyre choice, he chose Continentals.

I’d better get them ordered and fitted. I’ll publish my findings here in a few weeks.

Update (5th February  2011) – I received a pair of Continental GP4000s in the post this morning and so, even though the weather was pretty awful, I decided to fit them and go out for one of my regular rides. As I’d recently noticed that the current wheels (the original Bontrager wheels which came with the Trek) have worn hubs, I fitted the new tyres to the wheels I intend to use for the TDF or Bust trip. These were hand built in 2002 by Parker International using Ultegra Hubs with Mavic CXP30 rims on DT Swiss stainless steel spokes. Although these wheels have a few miles under their belt, they are still as true as the day they were built.

First impressions are that the bike has been totally transformed. I know that this can’t be attributed solely to the tyres but the ride is so much more responsive than with the old wheels and tyres. You can tell that the tyre pressures are higher than on the old tyres however, unlike the Continental Grand-Prix I used in the 90s, the shock absorption of the GP4000s make for a more comfortable ride.

As far as tyre wear is concerned only time will tell but first impressions, after 25 miles, is very positive.

Update (22nd February 2011) – after 270 miles, in mainly wet winter conditions, I can confirm that these tyres are wearing very well. No punctures (although no that I’ve said that, I’ll probably get one tomorrow!) and no cuts. Very pleased with these. At this mileage, I would expect my old Michelin Race Pro to show a greater sign of wear to those.